Poultry production in Vietnam is booming and expected to double before 2021. However, farm owner Le Van Du isn’t planning to produce for the bulk market. With his own bird variety he is aiming for a niche market, focusing on taste and meat quality.

Chicken is a popular meat in Vietnam and egg consumption is substantial as well. Go into any hotel in Vietnam at breakfast time and there is always a queue of guests waiting for a freshly cooked omelette. Fast food chains have sprung up all over the country with chicken being a popular choice. Vietnam has several large trade fairs such as Ildex and Vietstock with row upon row of company booths selling products connected with the poultry industry, which give an indication of the importance of this livestock sector to the Vietnamese economy. 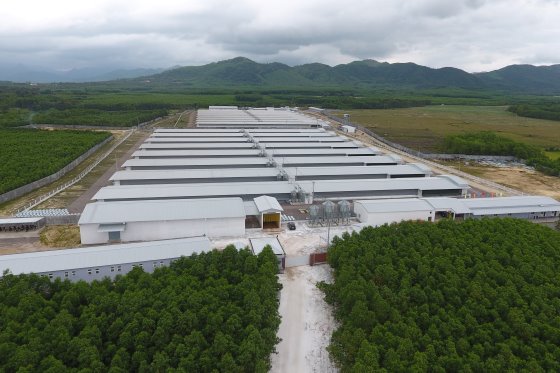 Chicken consumption stood at 8kg per head in 2015 and this figure is expected to more than double by 2021. Total production of chicken and eggs increased by 6% in 2017 versus 2016. This was split between one million tons of meat and more than 10 billion eggs (2017). This increase in production reflects the fact that the Vietnamese population is rising, as are the nation’s living standards. Other factors fuelling this increase in consumption of poultry products are increasing urbanisation and the desire for a healthier lifestyle.

A total of 420,000 birds are produced annually, plus a substantial number of day old chicks are exported to nearby Laos and Cambodia. Photo: Stuart Lumb

Le Van Du is a man with a mission. He was brought up on a family farm in Huynh Mai Village, Tuy Phuoc Town, Binh Dinh Province, Vietnam. He always had an interest in poultry farming and started his own breeding programme back in 2006, with meat quality being a key aspect. The skin taste is important to Vietnamese consumers and so this has been selected for as well. Growth rates are about half other commercial strains but as this is a niche market the higher price that these birds attract compensates for the slower growth rate. 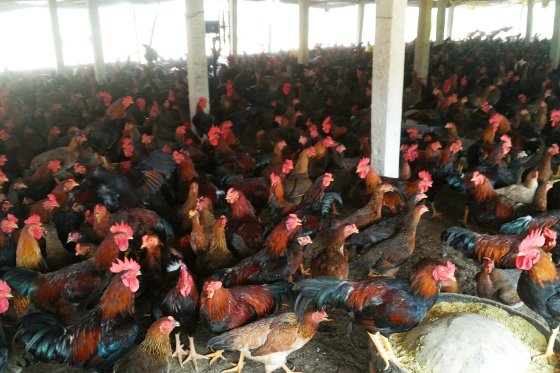 The special breed was selected with a focus on meat quality and skin taste, important aspects for the local market in Vietnam. Photo: Stuart Lumb.

Mr Van Du has registered his seedstock as the Minh Du breed, made up of 3 separate lines, MD1, MD2, MD3 and this achievement has been recognised by the Vietnamese government. In fact Mr Van Du’s company was the first to be recognised in this way and the numerous trophies displayed on Mr Van Du’s desk bear testament to the success of his business in the Vietnamese poultry sector.

Many companies in Vietnam are quite often joint ventures between the government and commercial organisations. Minh Du is exceptional in that it is a completely self-funded company and exclusively owned by Mr. Van Du. The company is growing year on year, currently employing 500 staff. This will rise to 1000 by the end of 2019.

Poultry World was taken to visit a large environmentally controlled breeder unit containing 420,000 breeder birds and located near Huynh Mai Village, Tuy Phuoc Town, Binh Dinh Province. The farm is quite isolated which is very important with regard to biosecurity. Electricity is vital hence the site has its own standby generator in case the local electricity supply fails. A bore hole provides water for the farm with water quality being strictly monitored and treated when necessary. Biosecurity is taken very seriously and the whole farm is surrounded by a substantial wire fence, supported by concrete pillars. Unit staff live in an accommodation block located inside the farm (this is very typical of large livestock facilities in Vietnam) and hence there is no daily entrance and exit of the staff to and from the farm. This naturally reduces the risk of any disease being brought on to the farm. 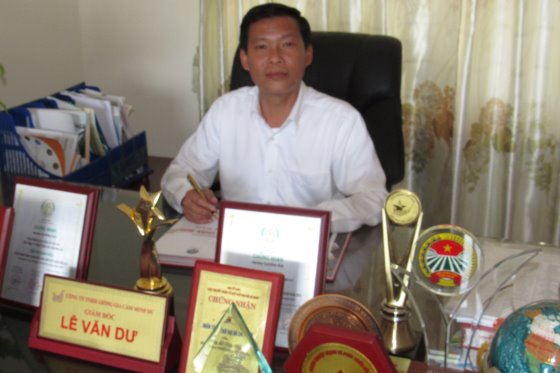 Mr Van Du has registered his seedstock as the Minh Du breed, made up of 3 separate lines, MD1, MD2, MD3 and this achievement has been recognised by the Vietnamese government. Photo: Stuart Lumb

Expert veterinary support is provided Viphavet, a prestigious Vietnamese veterinary products company headquartered in Binh Duong Province. A team of technicians employed by Mr Van Du is responsible for vaccinating birds using both live and dead vaccines. The team also carry out post mortems on dead birds and liaises with outside labs if a new disease problem arises. Marek’s disease is a serious problem in Vietnam so naturally chicks are vaccinated against it. Humidity is kept at a low level in the buildings and consequently mites are not a problem.

All the feed is bought in by truck in crumb form and stored in 11 silos. Feed is augured mechanically into the bins and not blown in, as in the case in many European farms. Silos are refilled every 2 days hence the feed is fresh for the birds and not affected by the high daily temperatures common in Vietnam. Toxin binders are included in the feeds plus certain other additives and when necessary antibiotics are added to diets, under veterinary supervision.

Mr Van Du has bred 3 distinct lines with differing growth rates, target weight for line MD 1 is 1.7kg, for MD 2 between 1.9-2.0kg and for line MD 3: 2.2-2.3kg. A total of 420,000 birds are produced annually, plus a substantial number of day old chicks are exported to nearby Laos and Cambodia, with Indonesia being a potential market as well. In fact production cannot meet demand and hence chick production is being racked up.