1. The preparation work for warming chicks:

a. The raising house and poultry equipment must be cleaned and disinfected 5-7 days before warming the chicks.

b. The floor fillers layer must be prepared before the chicks are brought into the house. Spread a 5cm-thick layer of floor filler (rice husks) on the house floor, and level it so that the chicks can walk easily.

c. The entire house must be heated for 3 hours before the chicks are brought into the house. Drinking water must be mixed 0.5 hour before watering. Always keep the brooding temperature (or heating temperature) suitable for the chicks in order to not let the chicks be cold.

- Ideally, when warming the chicks, use electric incandescent bulbs with yellow light to let the chicks move quickly and maintain the temperature in the enclosure well.

- Each warming enclosure area of 5m2 can warm only 500 chicks (then loosen the enclosure gradually to fit their growth).

- Use bamboo sheets or mats connected together to make the warming enclosure.

- The warming enclosure height is about 50-60cm.

- Each warming enclosure is put to have five 100W bulbs hung with the bulb cover. The bottom position of the bulb is hung 15cm higher than the chick’s head.

- Each warming enclosure requires 8 chick-feeding trays of 40cm diameter and 8 drinking troughs of 2-liter bottle type. They are all placed alternatively in circle inside the circular warming enclosure to ensure convenient eating and drinking of the chicks. 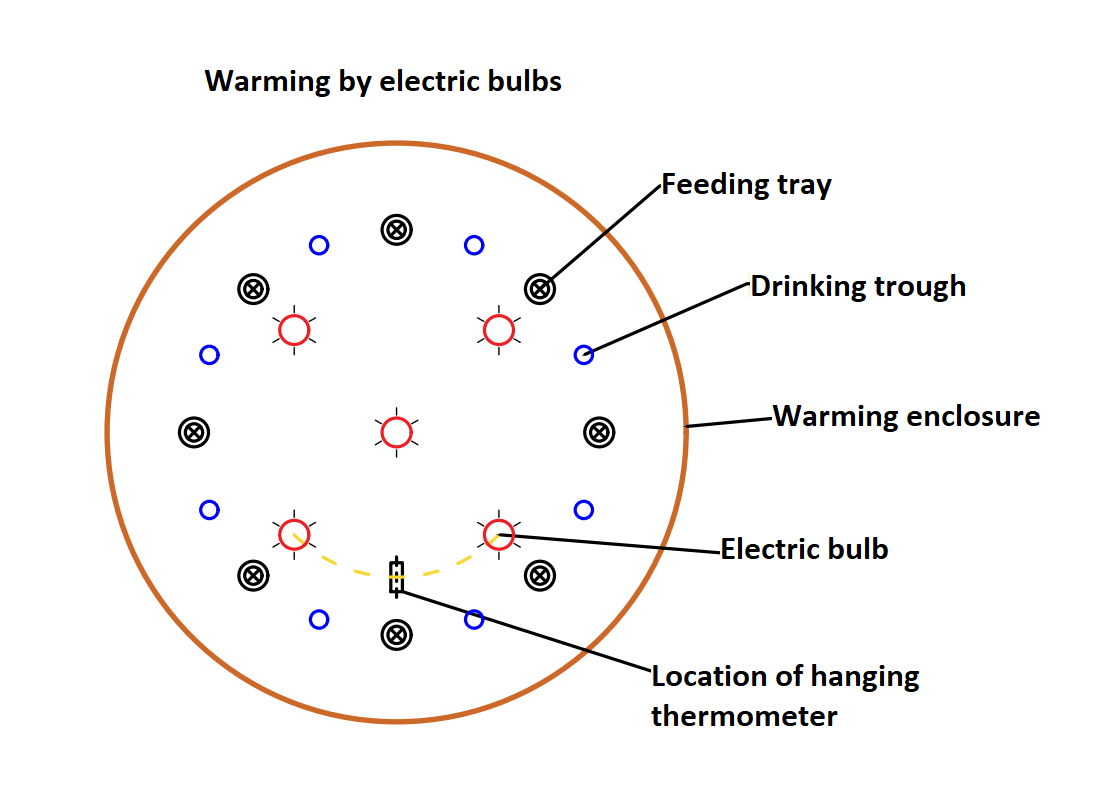 - Use a big gas-heated lamp and hang it 1.2m high from the bedding layer surface, with its position at 1/3 area of the warming enclosure. The leaning angle of the gas lamp cover is 150 to ensure the heat spread maximum for the chicks to disperse evenly. This principle is applied to radiant heating system or air heating system. The gas lamp used for the warming enclosure is typically designed for 1,000 one-day-old chicks on a floor area of 15m2 and cover curtain height of 2m from the bedding layer surface with a ventilation opening of 30cm underneath. 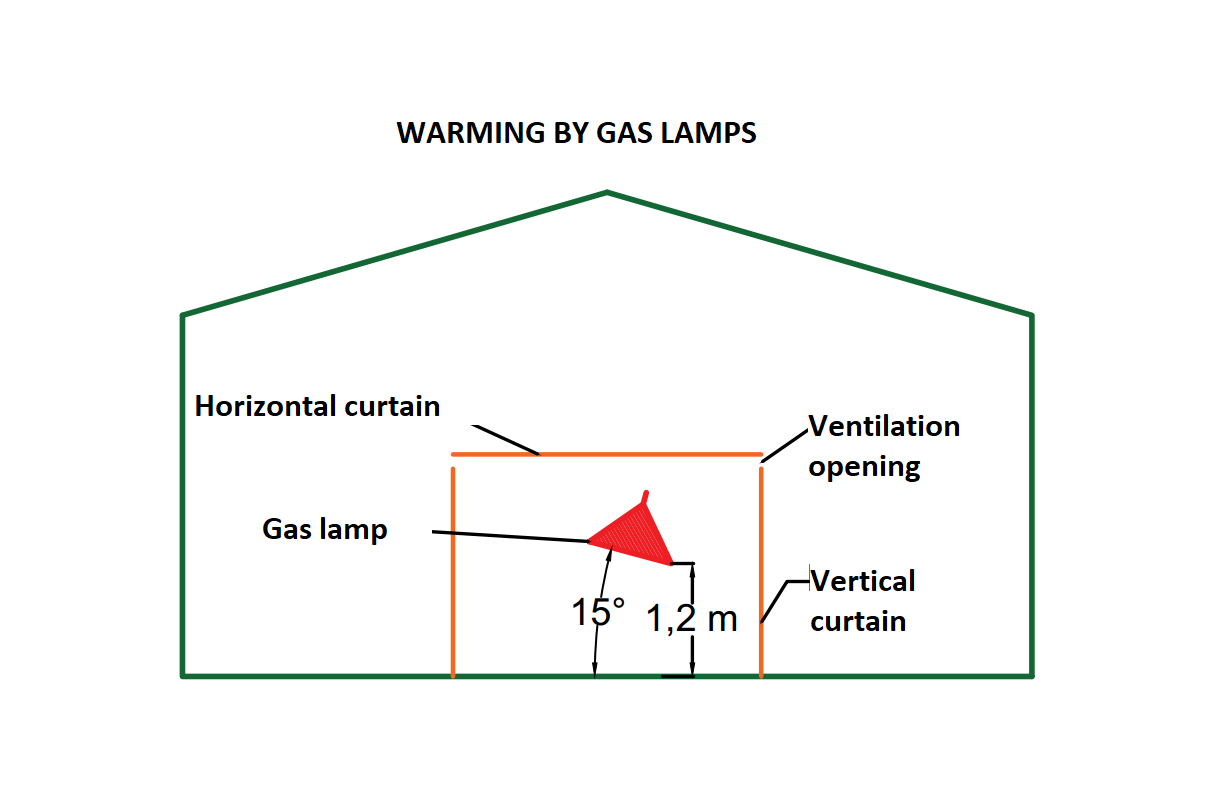 2. Taking care of chicks (after a long journey of transport or after newly receiving from the seller)

- When the chick boxes are brought into the poultry house, the chick should be released into the warming enclosure area as quick as possible. Note to distribute the number of chicks into all warming enclosures equally in terms of density if there are many enclosures per chicken house. Right after that, the chicks must be watered immediately.

+ Mix 20g (Bio) Vita electrolyte + 500g Glucose + 20g Vitamin C with 10 liters of water for the chicken to drink continuously for the first 6 hours (to compensate for dehydration and energy due to long distance transport).

+ Turn the feeding tray upside down to use it as the drinking trough for chickens to drink for the first one hour and then let them drink from the drinking bottle-shape trough. It is because at this moment they are very thirsty and need a large standing area of drinking to prevent themselves from fighting each other to drink and from making their feather wet, which is very dangerous.

+ Water the chick with Glucose + Vitamin C for 6 hours, then mix chicken-warming medicines or Colistin + Tylosin for chicks to drink consecutively for 3 to 5 days.

+ Only feed the chicks after they drink enough water for the first one hour.

+ Make sure that chicks have enough water to drink regularly and clean the water bottle-shape trough before pouring new water into it.

- When chicks are at young age, let them eat freely and feed them 6-8 times/day to stimulate them to eat more. The feed must be regularly available and adequate for chicks to eat and grow well.